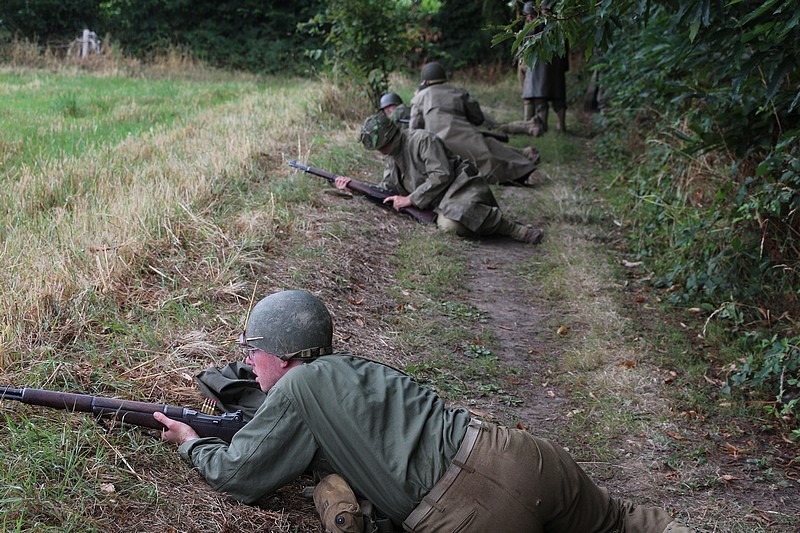 PFC. Palmer On His First Encounter with a Panzer in France

I’d been reenacting for nearly four years when I packed a duffle and a suitcase and flew to France to participate in the 2aie Save the Breakout tour. From August 1 to August 10, we reenacted the 75th Anniversary of the Normandy breakout and the German counterattack at Mortain in southern Normandy, fighting our way from Avranches to Mortain. We lived like GIs of the 4th Armored Division and 30th Infantry Division, sleeping in fields, churches, and halftracks. Although I had a sense of what American soldiers experienced during the Second World War from my stateside reenactments, fighting real Germans in the same fields and towns that my forefathers had 75 years before was a unique experience that I’ll carry with me for the rest of my life. Below is an excerpt based on my journal entries halfway through the trip.

Our platoon lay ready in a sunken road overlooking a grass field. To our rear was the hedgerow full of the vile creatures that had kept us awake the night before. To our left was the cornfield and forest we had fought to secure for the previous 24 hours. Exhausted, sore, and thirsty, we peered into the field ahead of us, straining to see any movement. Seconds turned into minutes. We rearranged our gear, and some took off their heavy helmets to relieve the stress on their necks. NCOs cautiously moved along the line, making last minute adjustments to our position. Fear slowly turned into boredom.

And then we heard it. With the flickering of wind, the approaching roar of a motor and creaking of treads penetrated the air. And then it was gone. Fear, excitement, and confusion danced along the road.

We had been waiting for what felt like an hour. And now, the first sign of attack had disappeared as swiftly as it had arrived. Was this some collective apparition? After the shitshow of the previous night, I began to doubt what I’d heard. I’d had the first watch and I confused a few rodents scrounging for food with Jerry infiltrators. Our two squads went on full alert. Panic spread. A patrol on the other side of the line set off without telling anyone and was wiped out by nervous Joes. Even after we found nothing, guards continued to hear things. Sarge sent a patrol out to investigate at 0200. After lying wet and freezing in that godforsaken road, moving into the darkness felt good, even if it meant we were inching toward a firefight.

We heard the motor and treads again. A little louder this time. There’d been rumors of a large German armored unit in the area, but so far, we’d only faced their infantry. With only two bazooka teams and a 57mm AT gun, I feared that anything much larger than an armored car could wipe us out. Whatever this thing moving toward us was, it still had a ways to go. I reached for my belt, fumbling as I opened the two lift-the-dots and retrieved my canteen. Careful to conserve water, I sipped only enough wet my mouth. The minutes ticked by. But we knew it was coming. There was nothing more we could do but wait.

The rain arrived with the tank. Through the drizzle we first saw a turret, then we watched as a Panzer III crested the hill, creaking toward our right flank. Unknown numbers of infantry huffed its exhaust. Could they see us? Certainly, they had to spot our conspicuous 57mm AT gun. And yet no one fired. I was surprised by the calm that set over me. There was nothing more I could do. Watch. Wait. Hope. My bowels reminded me of my overdue appointment with some bucket or hole.

As it sped along a dirt road, I wondered what I would do when the Panzer smashed through our lines. If it made to the bend, it would massacre us with its machine-guns. What the hell were we waiting for?

From the bend, a white streak whizzed toward the tank and exploded against the panzer’s frontal armor, forcing it to a stop. With a cheer, our rifles, machine guns, and AT opened up on the exposed German infantry. We held off each probe, protected by the raised ground that had served as our pillows.

A burst of fire alerted us to a squad of Germans who had snuck up within yards of our right flank. My squad counterattacked, pushing them back toward their knocked-out tank.

After a brief firefight in a cornfield, we rounded up a few prisoners, disarmed them, and searched them.

I retrieved my shovel and raincoat, lost during the battle, and followed the stream of ragged GIs back to our weapon carriers and halftracks. I was drained. Wet. Tired. Sore. As we regrouped, we learned that we would be sleeping indoors for the first time in days.

Our convoy rolled into another ancient, small French village. After retrieving our gear and setting up my bedding in an unoccupied spot in the church, I spread my map and journal on a stone wall in the fading sun. I searched the map for any recognizable towns or fields to figure out where we were and where we’d been. With the last light, I frantically wrote down everything I’d seen and thought that day. I was determined to not forget these experiences.

Reid Palmer is the Authenticity Officer of the 401st GIR (Reenacted) and a staff member of the WWII Historical Reenacting Society. A version of this article has also appeared in the WWII HRS’s Official Journal, The EDGE, and the 401st’s Newsletter, Glider Rider.